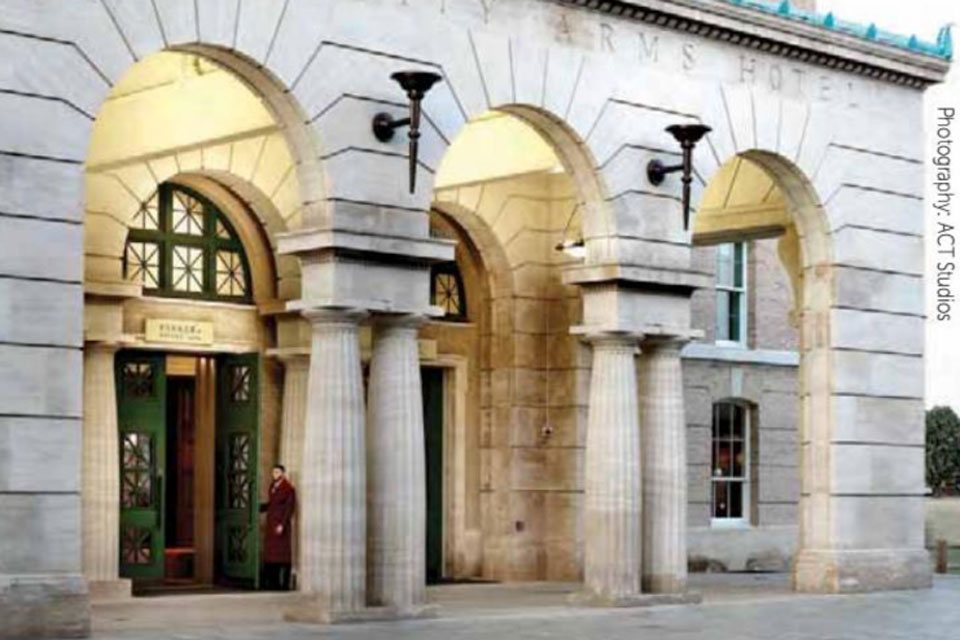 Just one hour from London, University Arms, Cambridge is a city-centre landmark hotel that is ideal for both business travellers and weekend explorers, as Hamish Kilburn discovers when checking in for the night…

Life is about the journey and not necessarily just the destination. At University Arms, Cambridge, however, life inside the hotel is about both. The city’s narrative is referenced effortlessly throughout. In the corridors, for example, the carpet has been designed to reflect the same colours and patterns as that of the original Cambridge College tie. Meanwhile, the walls in the public area feature carefully curated artwork, such as The Man in the White Suit, highlighting modern life outside.

While the destination is obvious, slap bang in the middle of Cambridge, the hotel’s journey has been less smooth. University Arms, Cambridge made the headlines in 2012 after a faulty air conditioning unit resulted in a fire. However devastating at the time, such a disaster is generally followed by great opportunities. The decision to close the hotel in 2016 to undergo an £80m renovation, working with classical architect John Simpson, allowed Cambridge’s most historic hotel to rise from the ashes to become a superbly designed venue for business and pleasure.

When checking in through the majestic portico entrance, first impressions are that of a perfectly placed city centre grand hotel – complete with oversized chandeliers that hang in the large lobby, and friendly, welcoming front-of-house staff. Considering the limited parking, which is quoted as £30 per night, my first recommendation would be to take the train if you or colleagues are travelling into the city, which then just leaves a seven-minute taxi ride (or 20-minute walk).

Martin Brudnizki, who spectacularly recreated London Soho’s iconic The Ivy, spent two years working on the interior design story for University Arms, Cambridge in order to bring to life a warm, residential and inviting mise en scène that also gives an appropriate nod to the heritage of Cambridge and its prestigious colleges.

After connecting up to the strong wi-fi – without having to input a password – I was invited to experience Afternoon Tea in The Library at the hotel’s food and beverage offering, Parker’s Tavern. Ideal for day meetings, the quintessentially English brasserie is further enhanced by its unmatched perspective overlooking Parker’s Piece, a 25-acre flat plot of greenery that is regarded today as the birthplace of the rules of Association Football.

As the name ‘The Library’ suggests, this area is adorned in Cambridge-themed classic books, such as Wind in the Willows and Porterhouse Blue.

Just past The Library, the bar, which was originally an old coaching inn, has an impressive signature cocktail menu that further gives reference to Cambridge’s historic moments in time. For example, the Bloomsbury Boozer commemorates the formidable group of writers, academics and intellectuals that made up The Bloomsbury Set and who met at the university.

Elsewhere, in the basement, the hotel can cater up to 180 persons in the ballroom, which can be flexibly divided into two separate venue spaces. In this area of the hotel, as well as enjoying the private space for occasions or, in my case, a three-course dinner prepared by world-renowned head chef Tristan Welch, guests will also find original stained-glass windows that date back to the 1900s to represent the 31 original college crests.

Upstairs, the hotel’s 192 guest rooms and suites start at £160 per night* and are divided into four categories; Cosys, Classics, Superiors and Suites. I was checked in to the Franklin Suite, which starts from £460 per night*. With a large bed complete with linen of 300 thread count for maximum comfort, books curated around Franklin D. Roosevelt and underfloor heating in the expansive bathroom, the front-facing suite is sumptuous, spacious and one of the top rooms the hotel offers.

In regards to its design, attention to detail is immediately evident in all rooms. The ‘do not disturb’ signs are bookmarks while the writing desks have been made deliberately to look like traditional student desks.

Sheltering the same luxury of a London five-star hotel, but with arguably larger interiors, University Arms, Cambridge is a modern classic. The hotel has had its fair share of drama during its journey. But after an extensive renovation and sensitive reconstruction, it is now resettling in as one of Cambridge’s most iconic destination hotels for business and leisure.