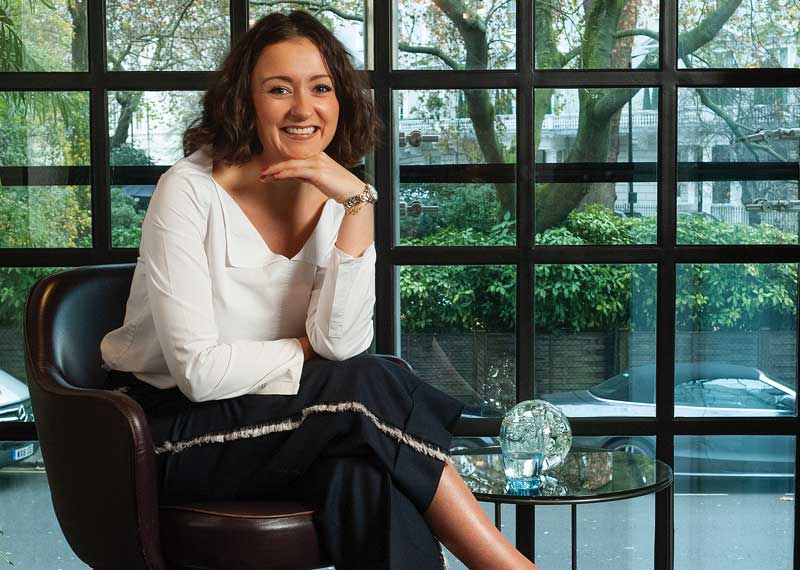 Working so closely to someone in the public eye requires a certain level of discretion, something which Abi Sangster, EA to Mary Portas, is all too familiar with. PA Life sat down with her to find out why she never planned on becoming an assistant, and how her gregarious personality has led her to achieve such a close-working relationship with her boss…

“To be honest, I never really set out or had that lightbulb moment to be an EA,” Abi Sangster, executive assistant to retail consultant Mary Portas, openly tells me. Despite this, she has garnered a career that has spanned many roles comparable to an assistant, such as a receptionist, team coordinator and a team assistant – therefore it is no surprise to learn that Sangster is now one of the key figures within the Portas team, as an EA.

“Throughout all my roles to date, one thing is clear – I’m always drawn towards interesting challenges and strong personalities. Every role I’ve had has helped build and prepare for the role I’m doing today,” Sangster shares. She certainly has found this within her current role, working alongside the ‘The Queen of Shops’ who is often in the public eye – Sangster’s role quite literally is ever-changing.

With two years under her belt at Portas, Sangster knows the business – and her boss – inside out, where she is never in the same place for too long. She reveals: “Working for someone with so many areas of expertise, it’s safe to say no two days are the same. One minute I’ll be taking notes in our boardroom at Portas, the next minute I’ll be sat in the recording studio at BBC’s Broadcasting House prepping Mary for a radio interview, the next week I could be sat front row of Melbourne Fashion Week. The only thing that’s constant is how varied each day is.”

I realised that this person put all their trust into me and the meaning of discretion and understanding was put to the test from the very beginning.

I meet with Sangster inside The Hari Hotel, located within Belgravia in London. The venue epitomises luxury, while remaining warm and welcoming from the bitter chill of the cold winter months that have fallen; it’s the ideal spot to reflect Sangster’s job role here in the City. However, the transition from a city EA to a full-time personal and public-facing EA was a challenging task. She tells me: “Priorities had to change and suddenly I knew everything about her. I realised that this person put all their trust into me and the meaning of discretion and understanding was put to the test from the very beginning.” 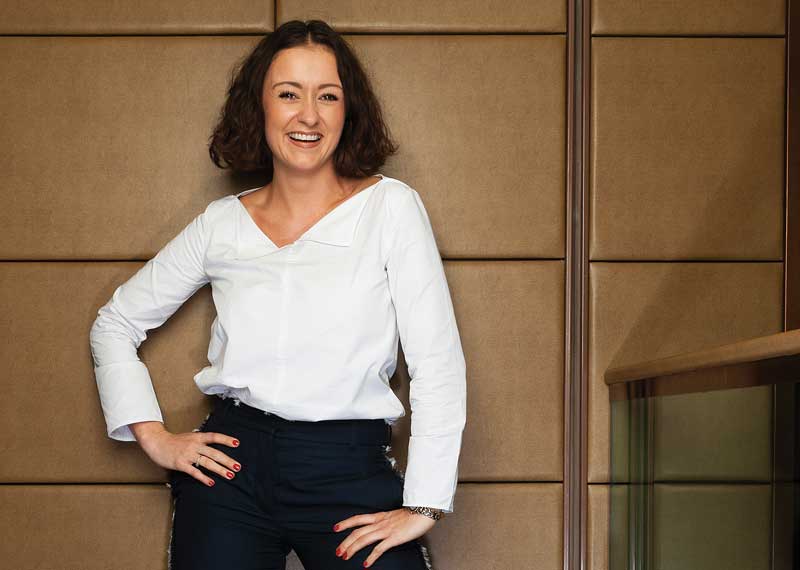 Due to Portas’ public status, having the knowledge of privacy is paramount to Sangster’s role, something she was very aware of when she began her position. She continues: “With any EA and their boss, discretion is key – it doesn’t matter whether they’re famous or not. However, as Mary does have a significant public profile, an added level of forward-thinking is needed when working with her, given that anything said or done could be used for a news story.”

Sangster’s bubbly and vivacious character is infectious; it’s clear to see that both her and her boss gel so well together – their personalities match one another perfectly. I got the chance to speak with Sangster’s boss Portas, and I was keen to find out what she looks for in an assistant: “Trust is number one. You have to trust them completely and that for me is the most important. But I think your assistant has to have charm – I really look for that in mine and she’s got oodles of it,” she adds.

“When it works and it’s a chemistry thing with mutual respect and trust at the heart of it that neither of you abuses, then you have got something very valuable.”

This year has seen Sangster spearhead several new changes, with one of her most memorable achievements proving to be the office refurbishment. With high expectations on aesthetics that were sustainable and suitable for an office environment, she had her work cut out for her. However, after introducing hot-desking and the new ‘Portas table’ to the workplace, she’s pleased to reveal that productivity has sky-rocketed.

“This year I renovated our offices at Portas and I couldn’t be prouder. Beyond the bookshelves, plants and art we installed, I came across a new company, Open Desk. We’ve since added to their range ‘the Portas table’ – they use wood and recycled yoghurt pots to make it – who knew your old Muller yoghurt could later look like a piece of marble?

“The energy in the place has never been better and it would seem that business is even getting better as a result of this. I’m really proud of that.”

Supporting Portas throughout her day is a maximum priority for Sangster, and now that her boss has released her third book titled Work Like a Woman (which is now available from Amazon for £6.49), Sangster is excited to see what its release will bring to the PA community.

“The book details the shift that Mary believes work culture should make (from alpha and bullying to more feminine and collaborative). I’d love to see this manifesto realised across industries,” enthuses Sangster.

“In particular I believe that we – EAs, PAs or VAs – whatever type of support role we do, have an incredibly valuable voice and hopefully this book and movement will encourage us to do more and most of all use our voice in places.”

During our shoot, Sangster dons a badge that also reads ‘Work Like a Woman’, reflecting her passion and support for her boss and all she does. Thanks to her dedication, Sangster has been able to grow in confidence, while also understanding just what she needs to offer as an assistant. For example, she advises that more assistants need to have the confidence to speak on behalf of their boss and cannot be afraid to take charge and make decisions.

Don’t get flustered and remember your role is to remind them that everything is under control.

She continues: “Use your knowledge of your boss’ personal life to help with how you prioritise their workload. It’s not my job to tell Mary when to buy a birthday present for somebody, but if I have the thought before she does, I’ll be sure to handle it so it’s one less thing she has to do in her day.” 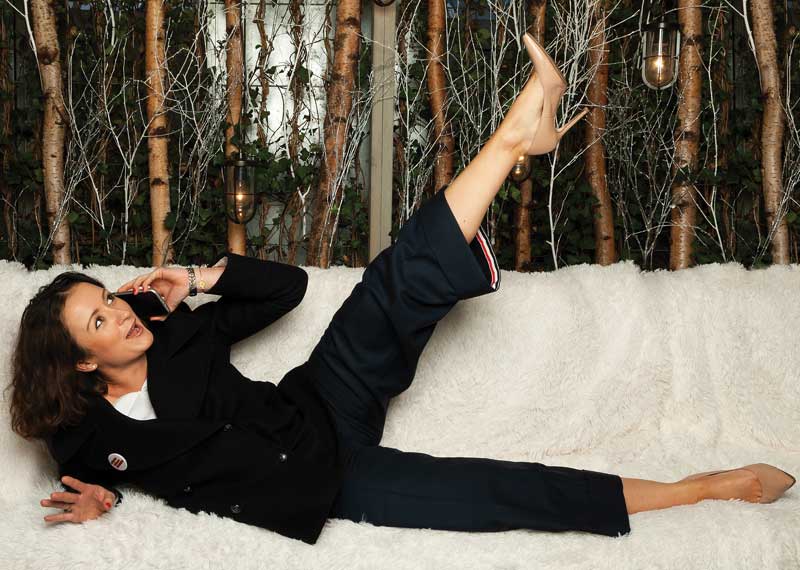 And it seems Portas unequivocally agrees, as she tells me: “It’s knowing when to do something and knowing when to interrupt. It takes intelligence; you need a sharp mind because you really are bringing every skill to the role and it’s the ability to be able to guess a situation even before it happens, that I think is brilliant, and Abi just picks it all up.”

Armed with plans to build her role and allow Portas’ team assistant to grow and develop into a PA, Sangster is now ready to take the next step in her career. However, I am keen to find out what advice she would tell herself when she first started in the industry.

“It would be to remove your ego,” she claims. “Know it’s not all about you and don’t take things too personally. The stakes are high and your boss will be under pressure. Don’t get flustered and remember your role is to remind them that everything is under control (even if it isn’t).”

These words will give any aspiring or seasoned assistant some food for thought. In such a fast-paced industry, it’s essential for PAs to take control and lead the way for their boss, something Sangster is championing perfectly.

PA Life goes behind the scenes –

As part of our PA Profile with Abi Sangster, we were lucky enough to take a trip to the Mary Portas London offices where we recorded an on-camera piece in which Sangster reveals how she became a PA, her relationship with Portas and more about their office design. See the video in all its glory right here – 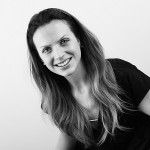