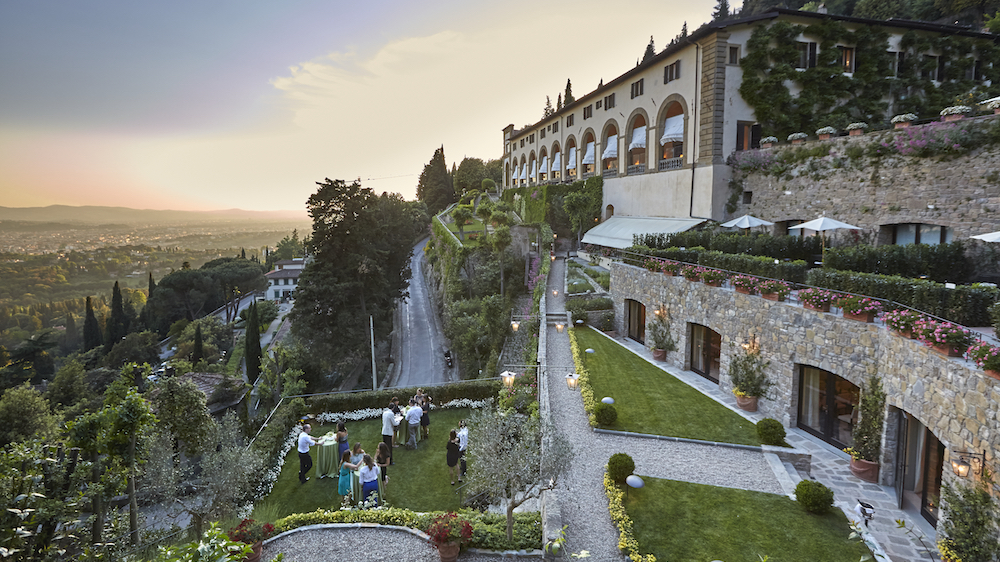 Florence is home to hundreds of years of art history and offers the ideal location for both leisure and business trips. Molly Dyson escapes to the Tuscan hills outside the city for a taste of true Italian hospitality.

Classic film aficionados will recognise the picturesque Belmond Villa San Michele as the location of 1962’s Love On a Pillow, in which Brigitte Bardot plays a woman who falls in love with the wrong kind of man. Luckily, the beauty of the venue and its panoramic views of the city of Florence banish all the negative connotations of the film.

Founded in the early 15th century by Franciscan monks, the former Tuscan monastery perched in the hills of Fiesole boasts a façade that has been attributed by historians to Michelangelo, one of the city’s greatest and most prolific artists. Renovation in the 17th-century building following damage in World War II has maintained many of the original features – frescoes, tall arches and terra cotta floors.

In the grand style of the Italian renaissance, the monastery was decorated throughout with religious icons, the most striking of which is a version of The Last Supper completed by Nicodemo Ferrucci in 1602. Belmond (formerly known as Orient-Express Hotels) had the fresco restored in 1999, pealing back layers of dust and debris and revealing surprising details – a small white cat at the foot of the table, a window with a cloud above it and the identity of Judas, the only apostle depicted without a halo.

Belmond has made clever use of the existing structure, adding a glass roof to the former cloisters to create a stunning addition to the restaurant, La Loggia. The company has also taking advantage of the sprawling grounds to construct luxurious suites, all of which are carved directly into the hills.

The villa has something for everyone, whether they’re visiting for business or pleasure. Families with children are welcomed with bathrobes and slippers for the little ones, as well as an activity book and points of interest for kids in the city centre. Adults can take advantage of the hilltop heated pool, complete with gym, casual restaurant and bar, as well as a private massage space.

For corporates, the hotel offers several event spaces, including the brand new Davanzati room, which has been carved directly into the hillside below the main building and opened for business in April this year. It features a private entrance and its own toilets, as well as a partition that turns one space into two. It’s ideal for meetings, dinners and cocktail receptions.

I visit the property just ahead of the end of the hotel’s season. I’ve been invited to experience the new event facility and to see what the city has to offer out-of-town corporates.

When I arrive, I’m escorted to my suite, which sits in its own building in front of the villa. It’s nothing if not amazing, with a private garden and roof terrace, a large sitting area, big comfy bed and a vast bathroom. Having been aboard Belmond’s Royal Scotsman on a previous trip, I can see little touches around the room that tie the two very different locations together – crisp linens, fluffy robes and cosy slippers.

Soon after check-in, I join a group of journalists from France and Germany at the pool restaurant for what our Italian hosts call a ‘light’ tasting lunch. Executive Chef Attilio di Fabrizio serves up three delicious types of pizza – traditional margarita, a yummy version with prosciutto and a tasty ‘white’ pizza with mushrooms. It takes us a while to decide on an accompaniment for the next dish of handmade pasta, but we finally land on fresh clams smothered in a delicious garlic sauce.

Next we’re whisked away to the city centre to meet our tour guide for a very special journey aboard a raft down the Arno River. Zeno from Firenze Rafting gives us a safety lesson and then takes us to the top of one of the river’s many dams to give us the thrilling experience of paddling over a short ‘waterfall’. We spend the next hour leisurely travelling under the city’s four main bridges, including the medieval Ponte Vecchio, while Zeno regales us with the history of Florence.

We’re met at the end of our journey by a trio of Ape Calessinos, a throwback to the “La Dolce Vita” (sweet life) attitude of the 1950s and 60s. It’s a real eye-opener to sit in the back of the three-wheeled vehicle while our driver from Tuk Tuk Florence (tuk tuk is the word for them in India and Indonesia) zips through the crowded streets of the city centre to take us past Florence’s greatest landmarks. The little cars even manage the steep hills surrounding the city to give us breathtaking bird’s eye views of the buildings and even drop us off at the hotel at the end.

Dinner this evening is off-site at a local trattoria called Cave di Maiano. To give us an authentic taste of Tuscany, manager Francesco serves up coccoli, regional fried dough, with a platter of antipasti, followed by traditional rare steak, fried chicken pieces, seasoned potatoes and fried vegetables. Even though we’re all full after devouring the meal, we make room when we hear Francesco makes his own custard-flavoured gelato (ice cream to us Sassenachs) and tiramisu. Both are creamy and light and hit the spot.

The next morning brings a buffet breakfast in La Loggia, where a member of staff takes my coffee order and it arrives in the space of mere seconds. I skip cuts of smoked salmon and politely decline an offer of fresh cooked eggs in favour of fruit because we’re scheduled to meet chef Attilio for a cooking class, which can only mean there’s more food coming my way. I take my time sipping my coffee to marvel at the fact that the city is now invisible behind a veil of fog due to some unseasonable inclement weather.

Inside the venue’s cosy and modern cooking school, Attilio and his team have prepared our workstations with all the ingredients we’ll need to prepare our lunch. We start with a very simple Tuscan panzanella, a type of salad that came to being in the 16th century as a way for poor families to avoid wasting day-old bread.

Moving on to more complicated territory, Attilio explains that we’ll be making gnocchi , or potato dumplings. Having tried this dish at restaurants, I start off believing this is going to be a difficult one to make. But as we follow Attilio’s instructions, it becomes obvious I’m wrong. It’s as simple as kneading together mashed potatoes, flour, egg and a dash of nutmeg to make dough, then cutting it into tiny chunks. The final stage before boiling is rolling the dough off an interesting contraption – a wooden block with vertical lines – to give the gnocchi its distinctive appearance. We also make a light cherry tomato-based sauce to go with it.

The finishing touch is one of my favourite desserts, tiramisu. Again, I’ve always been under the impression that it’s hard to make, but Attilio makes it easy. After some vigorous whisking and mixing, we end up with a creamy concoction that’s very tempting to dive into straight away. Attilio finishes them off by sprinkling cocoa powder over the top through a stencil of our choice.

We return to La Loggia, where we’re served everything we just made – with some finishing touches by the chefs, of course. It’s all tasty but not too filling, which is perfect considering we’re about to travel into the city for a tour of the city’s most iconic building.

Arriving at the Cathedral of Santa Maria del Fiore (Saint Mary of the Flowers) – known locally as the duomo – we’re told to be prepared for a workout because we’re going to climb 150 steps to the building’s private terraces. This is an honour not available to the average tourist, but it can be booked for corporate groups as a treat. These walkways encompass the whole of the 15th-century building, giving us the opportunity to see the Gothic Revival façade from a whole new angle. Standing at one point, we can look up at the cathedral’s famous dome – all 90 metres of it. The path takes us back inside behind the massive stained-glass window, allowing us a bird’s eye view of the intricate marble floor below.

Back on the ground floor, we’re taken to a secret location just outside the cathedral for a once-in-a-lifetime tour of a brand new museum dedicated to the history of the duomo. The museum isn’t open to the public when we visit (it has since opened) so we’re sworn to secrecy and asked not to take any pictures.

Here’s a history lesson. The façade you see on the cathedral today was only finished the in late 1800s. The original plan was to cover the building with religious statues, but the builders ran out of money after completing only a third of the work.

The museum is full to the brim with statues taken from the cathedral to preserve them, as well as some that have been kept in storage out of site of the public for hundreds of years. The curators have found the plans for the original façade and managed to recreate the entire thing inside the museum – in itself a feat made all the more impressive when you see it in person. The curator exudes enthusiasm for what he has done as he takes us through the exhibits, making the tour that much more special.

By the time we come out of the museum, we still have some time before our farewell dinner, so I go for a wander around the city. I visited here when I was 18, so I relished the chance to see things that had become a distant memory, including the Uffizi gallery, which was covered in scaffolding during my last trip. Florence is famous for its high-quality leather goods and the intoxicating smell drifts out of many a shop as I amble through the streets enjoying the warm early autumn evening.

Back at the hotel and properly suited and booted, we meet for canapés and cocktails at the hotel’s brand new event space, the Davanzati room, which only opened in April this year. It’s a perfect addition to the property, fitting well with the existing décor. The staff has put on quite the spread for us, with a welcoming glass of prosecco and a lively DJ and violinist duo, as well as a red carpet entrance complete with fancy hats and a photographer. Our nibbles are delicious, ranging from vegetable bundles and arancini to crayfish on crackers.

Dinner takes place back at La Loggia, where chef Attilio serves up green ravioli with an aubergine and goat cheese filling in a fresh thyme sauce as a starter, followed by medallions of veal sautéed with summer truffles served with creamy potatoes au gratin and bundles of baby carrots. I practically lick my plate clean to savour the flavours Attilio has expertly blended in the dish, yet somehow I find room for dessert, a smooth trio of chocolate delights covered in a rich Aztec chocolate. We reminisce about our trip as we sip coffee and sample some handmade petit fours.

It’s difficult to leave Villa San Michele behind after such a fleeting visit, but real life beckons. Belmond will forever stand out in my mind as a company that cares about its guests, welcoming them with open arms and big hearts.

Belmond Villa San Michele, Via Doccia 4, 50014 Fiesole, Florence, Italy. Classic double rooms start from £442 per night, including breakfast and taxes. To book, or for more information, call 0845 077 2222, or visit belmond.com