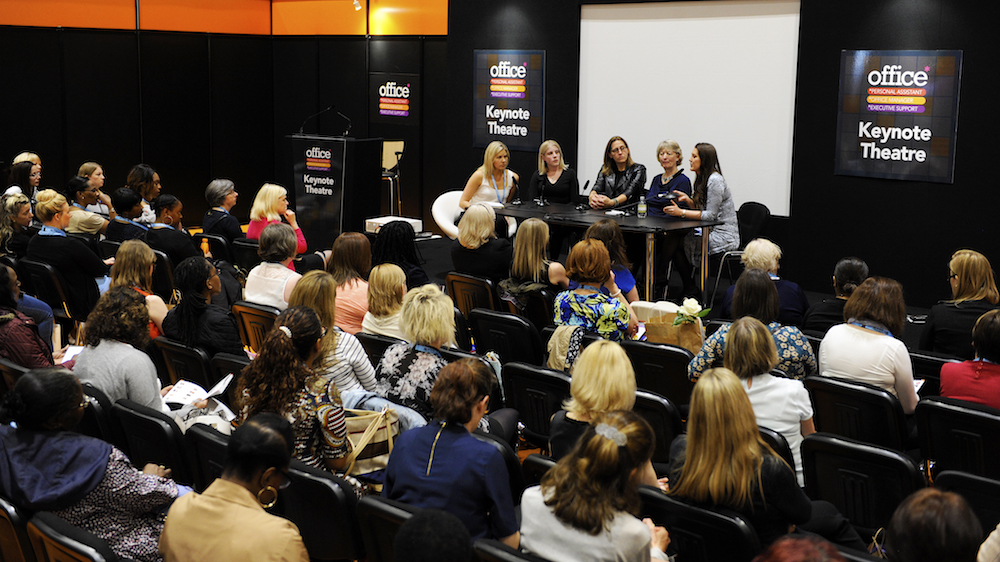 What’s in a name?

PA Life Editor Amelia Walker chaired a discussion at this year’s office* show to talk about the PA job title with assistants from around the world. Molly Dyson provides a summary of the conversation

Amelia started the session by asking what the panellists think of the role of the PA in 2016. Amy made the point that it was National PA Day, which is proof alone of how important assistants have become to the business world. “We are so far removed from the Mad Men perception of secretaries,” she commented. “It’s sad to think that even though we’ve come so far and we’re integral to business success, the stereotype of the secretary who takes notes and makes tea still exists.”

Heather then spoke up to say, “Often times it’s forgotten that we’re there for the success of our organisations; we do the same job as our managers, just through different tasks. We enable him or her to be effective and we have to be the ones to shout about that.”

Libby agreed. “That’s so true. If you think you’re ‘just a secretary’, that’s the atmosphere you’ll create. I always tell people they need to get in the right mindset before any meeting; start with yourself and your own idea of the role.”

Janice then spoke from her experience in Australia, where she said she doesn’t believe businesses see PAs as ‘just secretaries’. “Maybe it’s just my own attitude toward the role, but I’ve always had very supportive bosses. Without me my managers wouldn’t be successful. You have to remind yourself and others of that fact.”

Next Amelia asked Amy about her experience working for an American company. “For the most part higher-level assistants were called ‘Senior EAs’, but at other American companies they were sometimes referred to as ‘Chief of Staff’. I think the job title definitely makes them seem more important. The ones we use here in the UK don’t carry as much weight and it means our roles are quite limited.”

Speaking as a former Chief of Staff, Libby commented: “When I took the job it was a new title. In fact I wanted to drop it at one point because nobody knew what it meant. The company used to ‘number’ PAs based on their position within the organisation. I managed that team and quickly realised they were doing all the work, so I changed their titles to Executive Assistant, which I thought would help them carry more weight. I didn’t really ask the rest of the organisation what they thought of the change and frankly I didn’t care because it made a difference to my team.”

Heather, who had more than 20 years’ experience before opening her own training business, said she started out as a secretary, then made her way up the ranks. “That’s how it used to be. You had to earn your way into a PA role. But then people started changing the title because they wanted to take on more responsibility. Now it’s so vastly different in every organisation that those on the ‘outside’ don’t really understand the role.”

“I used to think there was a difference in the actual work when it came to job titles, but now I realise there really is,” commented Janice. “They’re all so conflicting and confusing. I started as a receptionist but I asked for a new title as I took on more tasks. I think that’s key to improving the perception of PAs. You have to fight to get the recognition and respect you deserve.”

Going back to her previous comment, Amy said: “You can stick the word ‘senior’ in front of any job title, but people still have preconceived ideas about the role. I like the term ‘Executive Assistant’ because it makes me think that person is a decision maker and works autonomously. It’s unfortunate, but ‘PA’ also carries gender connotations. We advertised for a PA once and not many men applied, but we had loads when we listed for an EA.”

Where does salary fit into the equation and how can assistants be sure they’re getting paid fairly? “Look at salary surveys,” Libby advised. “That’s very important. The job descriptions people write for recruitment ads are so extensive, but they really don’t understand how to compensate people appropriately so they don’t.”

“If companies pay a decent salary they’ll get the best candidates,” Heather added. “But as long as the stereotype of PAs exists the situation won’t improve.”

“If you can’t get your company to agree to a pay rise, ask for better benefits and perks to make up for it,” suggested Janice. Amy started her career in Manchester but had to move to London in order to get a better salary. “You can demand more money in different places. However, as more companies move out of the capital to other cities, the pay will start to increase in those areas.

“If you want to ask for a rise, build a business case,” she continued. “Write down everything you actually do in your role and compare that to the job description your company wrote.” So what is the solution? Libby believes it all comes back to the individual. “I’ve been out of the industry for four years now so I’m not too sure if titles will make a difference, but above all you have to respect yourself and demand the same from others. Don’t be afraid to ask for what you want in return for your hard work.”

Amy, who created a handbook for her company’s international PAs, said: “Mine was a very isolating role so I worked hard to put our processes in a single place for all of us around the world to get information. The same concept applies to any assistant; we all have our own special skills and experience that we can use to help each other so we have to get out there and network.”

“It’s all about your attitude and educating people about the role,” Janice said. “It’s a perfectly valid career path for anybody so you need to be proud of it and tell people exactly what it is you do.” Heather pointed out that your relationship with your boss plays an important part. “My boss taught me how to be the PA he wanted and he always put me and our relationship above all else. He was so proud of me and made sure people knew how important I was to him.”

Libby ended the session on a high note, saying: “The fact that you’re all here today connecting with other PAs and learning new skills is extraordinary. Everything you bring back to the office is going to add value to your business.”

All valid points from assistants who are helping to boost the profile of the profession. Now it’s your turn to take the reins.