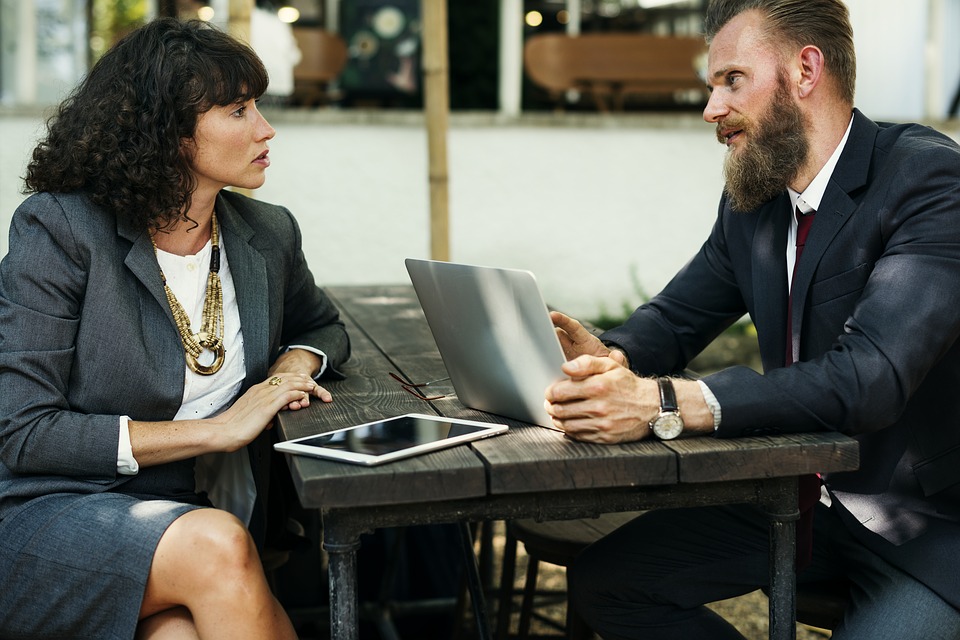 The gender pay gap is reducing

It doesn’t matter what industry you work in, the gender pay gap often sees men being paid more money for the same work compared with their female counterparts. However, with recent pressure on firms to disclose their gender-segregated wage-statistics, companies are being forced to identify their wrong-doings and change.

Women are paid less for the same work as men in the labour markets of most developed countries. When a man earns $10o, a woman earns $78.5 in Germany, $79 in the UK and $83.8 on average across EU-countries according to 2016-statistics from Eurostat.

Reducing the gender pay gap has been at the epicentre of a heated debate among academics, policy-makers and unions for years, and legislation that requires employers to publish gender-based wage-statistics to provide pay transparency has been proposed nationally and internationally in the belief, that this would promote equal pay.

Opponents of pay transparency have argued that disclosing gender differentiated pay statistics increases the administrative burden of firms, violates employee-privacy and confidentiality – and that the effect of all this hassle is unclear or even non-existing.

But new research shows that pay transparency has a positive impact on closing the wage gap. Economists from Insead and universities in Denmark and the US, have released a working paper examining the effect of a 2006 requirement for Danish companies to report on gender pay gaps by proving gender-specific wage statistics, find that the legislative step could be a promising new avenue for closing the gap.

The researchers examined wage statistics of companies prior to, and following, the introduction of Denmark’s 2006 Act on Gender-Specific Pay Statistics’ which obligates companies with more than 35 employees to report on gender pay gaps. In order to fully comply to the new transparency law, firms additionally needed to have at least ten men and ten women within a given occupation.

They analysed data from 2003 to 2008 and focused on companies with 35-50 employees and compared their pay data with identical information from a control group of firms with 25-34 employees – firms of a similar size but that were not required to release gender-segregated data.

The firms in the analysis paid their male employees an 18.9 per cent wage premium before the regulation was introduced, which is statistically significant for both firms that complied to the legislation and those who did not. The researchers ensured that this difference in men and women’s pay was not driven by differences in demographics, work experience, macro trends or selection into specific occupations.

After the regulation, the researchers found that the gender pay gap had shrunk to 17.6 per cent in the approximately 1000 Danish firms governed by the new 2006-legislation relative to the control firms, that were not required to publish pay statistics. A reduction of seven per cent. 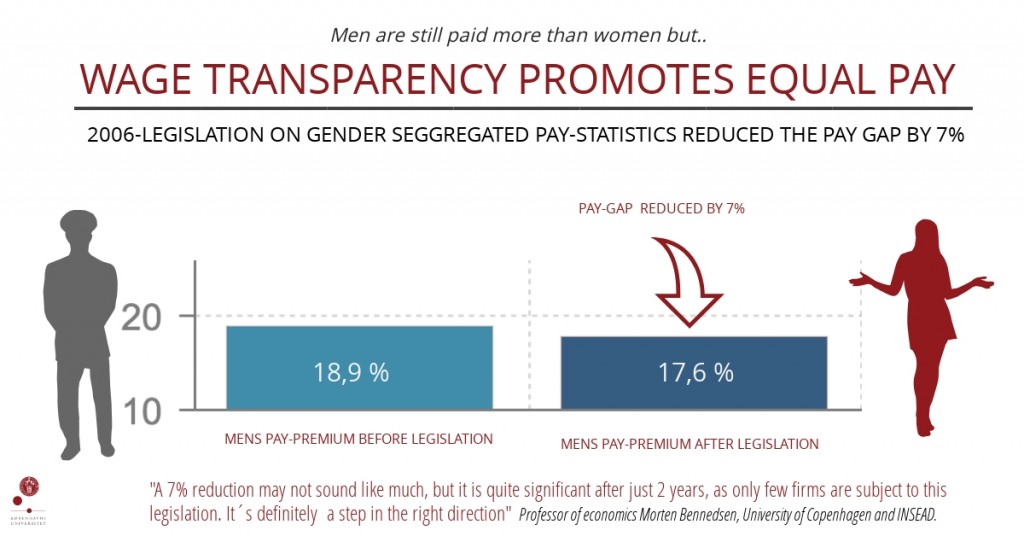 Morten Bennedsen, professor of economics from Insead and the University of Copenhagen, said: “For the first time we are able to document, that pay-transparency really works. A seven per cent reduction in the pay-gap may not sound impressive, but given the fact that only a limited number of firms in Denmark are governed by this legislation the effect is significant. We can even prove the effect amongst firms, that were not required to provide gender segregated pay-statistics. We know now that wage-transparency works and it is a measure that can be applied nationally as well as internationally. So from this point, it is really just a question of whether or not the politicians actually wish to do something about the pay-gap between men and women.”

Although wages for both male and female employees increased during the period analysed, the researchers found an overall decline in the wage premium for male employees in firms subject to the legislation, explained Daniel Wolfenzon, professor of finance and economics and chairman of the finance division at Columbia Business School.

The researchers found, that the reduction in the pay gap between men and women varied greatly between different types of firms. The reduction in the wage gap was bigger in firms where company executives themselves have more diverse families – especially if they have more daughters than sons. This was also the case in industries that had larger wage gaps prior to the legislation.

The 2006-pay transparency legislation also seems to have a couple of unintended gender-related consequences: Firstly, firms included in the legislation hired four per cent more women in the intermediate and lower hierarchy levels than control firms, suggesting firms are able to attract more female employees in positions where they offer higher wages. Other spill over effects appear to be that more women were promoted from the bottom of the hierarchy to more senior positions, after the implementation of the law, while researchers found no significant change in promotions for male employees.

Elena Simintzi, assistant professor of finance, University of North Carolina Kenan-Flagler Business School, said: “What is interesting is that the law has unintended consequences on women’s ability to climb up the corporate ladder and their willingness to join the labour market. When firms adopt more fair wage practices towards women, this can have positive effects on women’s labour market outcomes that go well beyond pay gaps.”

A few negative consequences of the legislation found by the researchers include a small decline in productivity in the affected firms. But with the simultaneous 2.8 per cent reduction in the firms’ total wage costs, there was no significant effects on overall firm profitability.

Margarita Tsoutsoura, associate professor of finance, Cornell University, said: “We cant tell for sure, why we see this decline in firm productivity. It could be that information on gender pay gaps simply lowers job satisfaction for female employees who find out, that they are paid below their reference group, or because male employees are dissatisfied with not getting the wage increases, they ask for.”