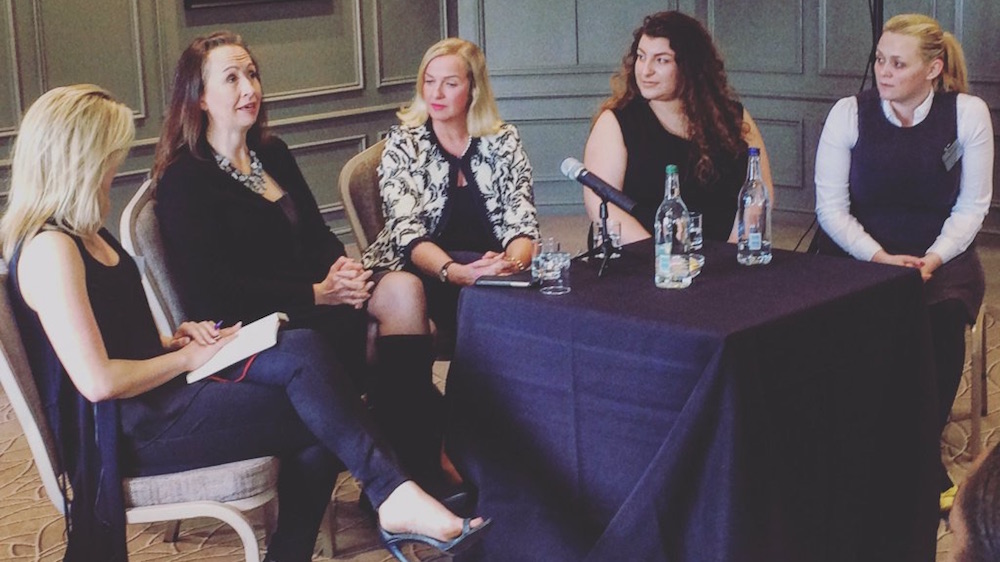 PA Life Summit panel discusses the challenges of being a PA

This year’s PA Life Summit was brought to a close yesterday with a discussion panel chaired by Editor Amelia Walker in which established PAs talked about the challenges of the role.

The panel – sponsored by The Hippodrome Casino – featured champions from the upcoming London PA Awards, including:

Amelia opened by asking the panellists what they think of the PA role in 2016. Anita said modern-day assistants are now the go-to people in their organisations. “People always turn to me with questions. You have to be all-singing all-dancing as a PA. There’s more business knowledge involved in the role than there used to be.”

Venetia agreed, commenting: “I was the first point of contact for my boss at British Land, as so many PAs are. You have to understand your executive’s job and be business savvy.”

Jessica added that assistants need to wear multiple hats to support their bosses. “It’s a partnership at the end of the day. You need to be proactive and stay two steps ahead of him or her. You’re both the psychic and the psychologist.”

Amelia then pointed out a recent survey that shows 31% of management assistants say they sit in board meetings and make executive decisions on behalf of their boss, to which Jessica said: “You really do have to think like a CEO these days.”

Anita brought the topic around to something that has been brought up at many of our roundtable discussions, which is the difference in job titles among PAs at various organisations around the world. Speaking from more than 20 years’ experience, Anita said she’s fascinated when she learns that some ‘Personal Assistants’ support more than one person. “Perhaps I’m showing my age a bit, but I always think ‘personal’ should mean you’re working one-on-one with a single person, whereas if you support more than one boss you should be considered an ‘Executive Assistant’ or a ‘Team Secretary’.”

At Venetia’s last job, she said there was even confusion within the organisation about people’s job titles. “It was unstructured. Working at board level made you an EA and there was more project work involved. Yet PAs supported multiple people and we didn’t have any ‘Team Secretaries’. But I don’t really feel like you can give it your all if you’re supporting nine people, so how can your role be considered ‘personal’?”

Moving on to the subject of understanding your company, Venetia said: “In my last role I tended to visit people in different departments. As a PA you should get around the office and people will start to know who you are and they’ll respect you for it.”

“Our old office was open plan, so everyone knew everyone,” Jessica added. “But in our new location, every department has their own office, so the team atmosphere has broken down somewhat. That’s what makes it so important for me to make a point of going around to the different departments to visit people rather than just sending an email or calling them. I’m the eye and ears of my boss, so wouldn’t I go into their environment to find out how they’re doing?”

When it comes to the PA/boss relationship, Anita believes she has been lucky in her career. “All of the jobs I’ve had started out as temporary positions, so I’ve never actually had to interview for a role and it means I got to ‘try out’ the company and build a relationship with the boss before I committed to working with them.”

Jessica brought up a good point, which is: “There’s a turning point in every professional relationship when the two of you just click. A lot of PAs go through a rough transition when they start a new job, but suddenly things will fall into place and they start thriving.”

And if that turning point doesn’t happen? Anita said you just have to keep trying. “It’s up to you to make the effort. Take a step back and think about whether there’s anything you can do to make things better. At the end of the day, your boss has to feel you’re supporting him or her. That’s the most important part of your job. You also need to understand how your boss works. One of mine didn’t want to hear about problems, only solutions, so then it was up to me to stay positive and solve the problem on my own initiative.”

“You can break down any barrier by being charming,” commented Venetia. “You’ll inevitably come up against rudeness and aggression, but that’s no excuse to be rude in return.”

Amelia then asked the panel to comment on the average salary for PAs, which is a major point of contention in the community. Jessica said she agrees typical pay is too low for the job PAs actually do. “Most assistants are working two pay grades ahead of what they’re taking home.”

Amy chipped in at this point, having spoken to many PAs throughout the last two years of running The London PA Awards. “A big part of the problem is that a lot of executives don’t actually know what their PAs do. A great phrase I heard once is that a PA’s job description is usually a page, while in reality what you do is a book. How can your boss pay you what you deserve if he or she doesn’t know what you do? You have to point out when you go above and beyond so they understand how much value you’re adding to the organisation.”

Anita agreed whole-heartedly. “I act as a spokesperson for all of the support staff in my company and often hold meetings with the top partner of the firm. You can’t go any higher than him. During one of my first conversations with him he asked if I felt undervalued in my role, to which I responded: ‘Well… Yes, actually.’ He had no idea any of the support staff felt that way.

“When you go to your boss to talk about a pay rise, you have to let them know what they’d lose if they don’t reward you well enough. Point out how much experience you have and the cost involved in hiring somebody new who won’t have the same skills and may take months or years to get to know the business as well as you do.

“A lot of the time they simply don’t realise how much their PA affects their job. I once heard about a PA who was in hospital for two weeks and her boss visited, begging her to get better soon because everything at work was falling apart without her.

“And sometimes they surprise us. In the process of helping go through nominations for last year’s London PA Awards, I found out that my boss had secretly nominated me. The sense of pride I got from that was astonishing.”

To close the session Amelia opened the floor to questions from the audience, with one asking for advice on networking with private PAs and another getting amazing tips for dealing with a boss who’s having a hard time letting go of control of her diary.

Positive feedback on the session poured in almost as soon as it ended, with many delegates saying they found the Q&A session incredibly helpful. The PA Life team would like to thank The Hippodrome Casino, the London PA Awards and our panellists for making the discussion a huge success.