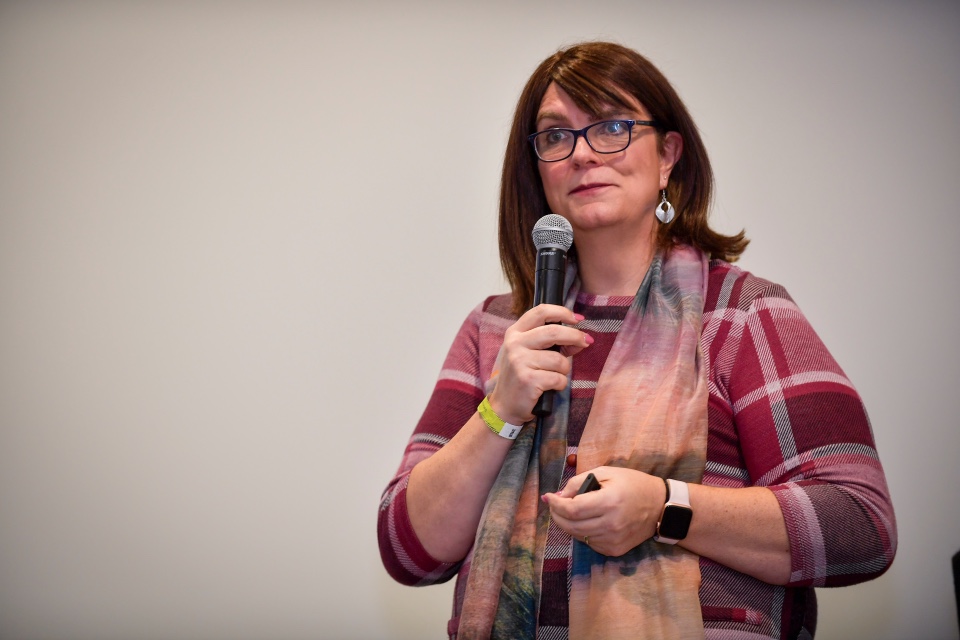 In advance of International Transgender Day of Visibility on 31st March, we caught up with Joanne Lockwood, a Diversity & Inclusion & Belonging Specialist who also promotes Transgender Awareness to organisations, and an Associate Facilitator with Serenity in Leadership, to find out what we need to do next to stop discrimination in the workplace and support inclusion of transgender and non-binary workers…

What types of discrimination are transgender employees facing?

“Trans employees, who include transgender, non-binary and gender queer individuals, often face severe discrimination in the workplace spanning speculation and false rumours to severe harassment including physical or sexual assaults.  Biases and lack of awareness means opportunities for promotions and recruitment of transgender employees is often extremely poor. They can often feel trapped in one place of work in fear of being rejected for future employment.  When someone transitions, workmates often act as if someone has died, or people disengage as they are not sure what to say and don’t know how to reengage the friendship resulting in that colleague being isolated and seen as less than they were.”

When you were transitioning, did your place of work help support you and how are things now?

“I had my own IT business with 20 staff and two co-directors.  I found it very hard to transition at work and I was unable to share this part of me.  I was struggling with my mental health at home and at work and not performing as well as I should.  For me it felt easier to allow my co-directors to buy me out rather than face opening up to everyone.   When I left, I already had this vision, passion and need to promote trans awareness to organisations. I know what it was (and is) like to be discriminated against, to feel marginalised, to have a sense of imposter syndrome.

“Now I have started my own practice specialising in inclusion and belonging, along with promoting trans awareness, and am able to use my lived experience to have conversations with people about discrimination and the impact of marginalisation.  I now work all over the world as a global speaker, offering training and consultancy and talking on panels and podcasts and I am also regular columnist, but I am keen not to be tokenised.

“I am extremely happy and comfortable living my life as a visible trans person and if I can give someone else inspiration to do the same or drive positive awareness, then I am doing something meaningful. I have been married for nearly 34 years, I have two great children, friends and parents and a brother who love me.”

Have things got any better in the workplace for transgender people in the last five years or so?

“In the workplace it is still often easier for an employer to find a reason to let a trans person go rather than have any sort of disruption, conflict or friction. Employers by proxy pass on bias such as beliefs that customers will be turned off and feel that they somehow need to protect the brand and reputation from us and stop questions being asked.  Then of course there is the bare-faced anti-trans movement seen as a result of radical feminism or faith. There is extreme anxiety for the transgender person about being open and it can have a severe impact on their mental health.

“However, the debate has increased, there are many more trans allies and more education and awareness.  We still need to break the eggs and it will likely take another generation to bring forth the required change.  That is just in the UK though. There are still probably 80 countries in the world that don’t recognise or condemn the transgender community, and the UK could still do much better by removing the medicalised pathways to self-determination of gender and recognising non-binary as a legal third option on official documents.”

Will the pandemic have had an effect on inclusion?

“We are of course all wearing masks now which cover our identity, so it is an interesting part of the discussion because trans people often are not allowed to be their authentic selves and have to wear “a mask”.  During the pandemic, there has been increased isolation. Trans people often live alone and so are more cut off.  Lockdown is very difficult if are struggling with your identity and there is a lack of socialising with like-minded people, who understand you.

What is the most common stigma you have come across in your work in inclusion and belonging?

“Often when I give trans awareness talks, it ends up being about toilets and showers. I joke that I have made it to 56 years old and have become a toilet consultant along the way – because that’s what people want to talk to me about. The reality is that people are confusing trans people with predatory men and evil perverts. This couldn’t be further from the truth. We just want to get up in the morning, have breakfast, do a great job, come home, kiss our kids’ goodnight and smile like everybody else. This isn’t a lifestyle choice, it’s who we are.”

What needs to be done to protect support and include transgender employees.

“Just because some people don’t actively disapprove of me doesn’t mean they will give me an opportunity. Employers tend to go for the easy hire even if they think they are forward and open thinking. They just want the corporate and perfect fit.

“The best place to start is to have a clear diversity policy.  Employers need to review their values and make openly positive public statements on their website, careers pages, intranet and social media and to act as allies to trans, non-binary and gender diverse people. Importantly use diverse imagery so you aren’t just representing one type of person.

“We need to amplify role models and engage with trans and non-binary people when making change and developing the business; actively listening to them and ensuring they feel safe, that they belong and are thriving.

“Ensure your recruitment process is open and inclusive and regularly review your policies. When recruiting review job adverts for gendered language and post them to sites for all sorts of diverse communities.

“Take harassment very seriously and have procedures and measures in place that you action without hesitation.”

How important is the language we use around sexual orientation, gender identity and gender reassignment at work?

“We need to have zero tolerance policies around unacceptable language and behaviour in order to build trust and confidence. Unpacking any concerns is important to see where training is needed. HR systems need to support name changes, gender neutral titles and as much as possible de-gender language.”

What is your future dream for gender inclusion?

“I want to get to a place when one’s gender and sexuality aren’t relevant yet are recognised and celebrated.  Acceptance without question. Where it stops being a conversation and is just understood.  We are not there yet.  In the meanwhile, we need to break down barriers, collaborate, raise awareness, and elect more inclusive governments and leaders.”