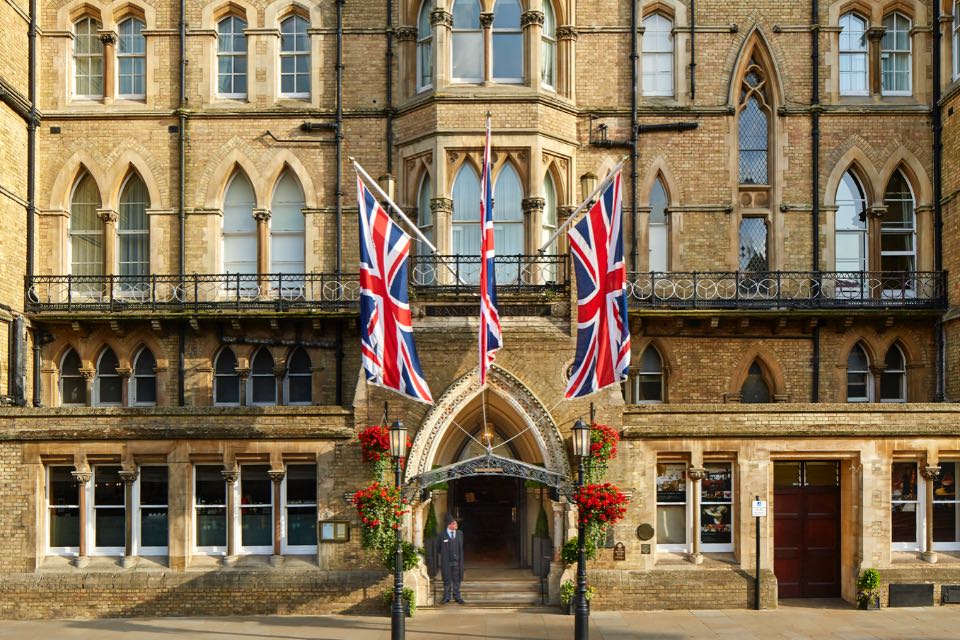 CHECKING IN: The Randolph Hotel, Oxford

James Borg revisits the recently refurbished 150-year-old landmark hotel in Oxford, ‘the city of dreaming spires’, that has spawned some of the greatest names in literature, such as Lewis Carroll, JRR Tolkien, CS Lewis and Philip Pullman…

The ancient town centre of Oxford has lost none of its historic feel, despite being wrapped around by new development and growing visitor opportunities for shopping and eating.

Right in the centre, with the train station just half a mile away, the 5 star Randolph Hotel has been the subject of extensive refurbishment of all of its 151 bedrooms, public areas and meeting spaces. With its Gothic revival facade and distinctive wrought iron portico, this listed building still manages to be striking, despite the breathtaking architecture of some of the University’s famous colleges and buildings that are moments away.

For more than a century and a half it has hosted world leaders in politics (including UK Prime Ministers and US Presidents), academia, arts, entertainment and business. It has always been popular for business meetings and functions, with its four function rooms being well set up for corporate events, meetings, conferences and dinners. In addition, there is The Ballroom, which has been remodeled and caters for up to 400 people.

When work is done there is so much nearby to absorb the mind. The hotel is directly opposite the world famous Ashmolean Museum – a must-visit. Being just yards away from the hotel entrance, it was Britain’s first public museum founded in 1683..

On arrival at the hotel you’re greeted at the concierge desk, headed by Clefs d’Or award winner, William Thomson. A more affable and knowledgeable concierge I’ve yet to meet. His willing and industrious team will relieve you of your luggage and if necessary, also park your car in the hotel’s garage.

Just to the left is the iconic Morse Bar. It was at this watering hole that the fictional detective in the TV series Inspector Morse would retreat, with his crossword and a whiskey to deliberate on cases, or to make his sidekick, Lewis, “buy me a pint”. Visitors from all over the world, who are fans of the programme, come to see or have a drink in this pannelled bar with its stone fireplace. Try a themed cocktail such as the Vesper Martini (Ian Fleming 007 connection). Or try the newly-opened modern Cartoon Bar with its collection of cartoons on the wall dating back to 1866. Some 35 types of gin are available here.

The striking lobby with its Corinthian columns, stained glass windows and vaulted ceilings leads you to the sweeping double-sided staircase. I remember when first visiting the hotel 15 years ago, walking up the staircase and having the feeling of being elsewhere – Hogwarts…

…Digressing – it’s of no surprise really. A few minutes away is the fan-vaulted staircase at Christ Church College that was used in the Harry Potter films – as well as the college’s cloisters. The dining hall provided the prototype for the Great Hall on the big screen. The concierge can advise about a tour of these Christ Church sights. The college is also world renowned as the home of Alice Liddell, the dean’s daughter who inspired ‘Alice in Wonderland’. Her creator, Lewis Carroll, teached and resided here.

Ascending the grand staircase with all the stained glass windows, each floor has a range of rooms and suites all with period features. The spacious executive rooms have bathrobes, slippers, Nespresso coffee machines, and large desks and work area.

Afternoon tea is a favourite that’s served in the ornate Drawing Room, with its plush seating and high ceiling.

You can unwind from the rigours of work by going subterranean down the winding staircase to visit The Spa. The candle-lit walkway leads to the four treatment rooms, with Elemis facial and body treatments and massages, a steam room, ice room and plunge pool.

The centrepiece of the hotel is the restaurant. Its in the style of a baronial hall with medieval chandeliers, forest green walls, full-length windows and all the college’s University crests lining the panelled ceiling. Breakfast is also served here, with the team orchestrated by the long-standing and unflappable supervisor, Penny. There is a cold buffet, and hot cooked breakfast is served to you at the table.

The city’s grandest old hotel remains steadfastly traditional while embracing the new with style. How do they manage to do this?

As Alice would say: ‘curiouser and curiouser’.

James Borg is a No 1 bestselling and award-winning author who has also been involved in travel journalism on destinations and hotels, since the 90s. He is working on a book on travel destinations featured on the small and big screen.