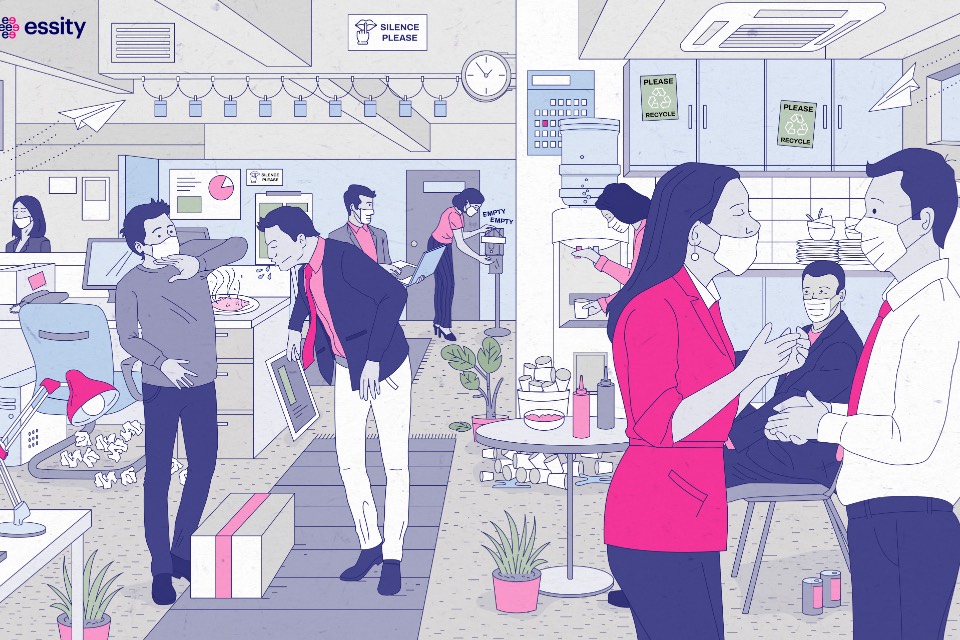 Are you guilty of conducting one of the seven deadly office sins?

Designers have created an image of how the UK’s offices may look if staff members return to their old ways following Boris Johnson’s proposed ‘living with Covid’ plan.

While some office workers might remain in masks in a bid to be considerate towards others, there are many cardinal sins illustrated which won’t be so well received by colleagues – but can you spot them all?

The puzzle comes as research reveals some of the biggest office gripes include sitting in tiny meetings rooms with lots of people, having to hot desk and no longer being able to wear comfy clothes.

A survey polling 2,000 office workers revealed the most common moans have evolved during the pandemic with a fifth no longer liking it when colleagues get close.

Another quarter – just as pre-lockdown – judge others for coughing and sneezing without putting a hand in front of their mouth.

People seemingly not washing hands after using the toilet, failing to sanitise regularly or opening windows without checking with colleagues nearby also annoy many.

While reams of paper being used on the printer and others spreading themselves out also made the top 50 list.

Staff also get frustrated with colleagues who leave lunch dishes lying around and think nothing of discarding paper towels on the floor.

As many as 42 per cent of employees admit they are far more irritated with their surroundings now they have returned to the office.

And four in 10 are less tolerant of colleagues, the boss and customers than they were pre-pandemic.

A spokesman for hygiene and health company Essity, which carried out the study, said: “Office gripes have always existed but the global pandemic and the heightened focus on our own hygiene and health has changed what behaviours we find frustrating now that we’re starting to head back to the office more regularly.

“Poor hand hygiene, coming in with a cough or a cold, and a failure to show any care or courtesy towards being environmentally friendly, have all shot to the top of our lists of bugbears.

“For employers, now is the time to put measures in place to minimise any chance of these office gripes upsetting employees that are being welcomed back after so long at home.”

It emerged the standard of hygiene in the office since going back has been a concern for almost half of those polled and, as a result, 28 per cent now take their own cutlery to work, while 38 per cent clean their own workspace daily and four in 10 carry their own hand sanitiser or soap.

A further 24 per cent have tried to avoid using public transport since returning to the office, preferring to walk or use a private vehicle, and 44 per cent think nothing of wearing a mask while working, if requested.

And more than a third now refuse to take part in the tea round and take their own mug to work for when they want a brew.

Employers have some way to go to keep staff happy, as 36 per cent would like a daily cleaning regime to include sanitisation of desks and communal areas and 31 per cent want things like anti-bacterial wipes available around the building.

A fifth of workers have already talked to management about getting recyclable items like paper towels and sanitary products in for staff to use.

While 18 per cent have asked the boss to supply appropriate recycling bins and 24 per cent want them to address the overall temperature of the building.

The space between desks, getting rid of single use items like plastic cups and turning off electrical items are all things workers have tried to implement with their superiors.

Perhaps unsurprisingly, more than two thirds of office workers said their whole working day can be ruined by a few bug bears, and nearly half admit they felt really anxious about returning to their workplace.

The average worker, polled via OnePoll, admits they grumble for up to a quarter of an hour every day, about things like people speaking loudly, computers being slow, IT issues and the phone ringing constantly.

The spokesman for Essity added: “There are lots of small measures employers can take to make the workplace a better space for workers.

“Whether it is improving recycling practices, making the office feel more sanitary, or giving workers the surroundings they need to feel comfortable, small steps go a long way.” 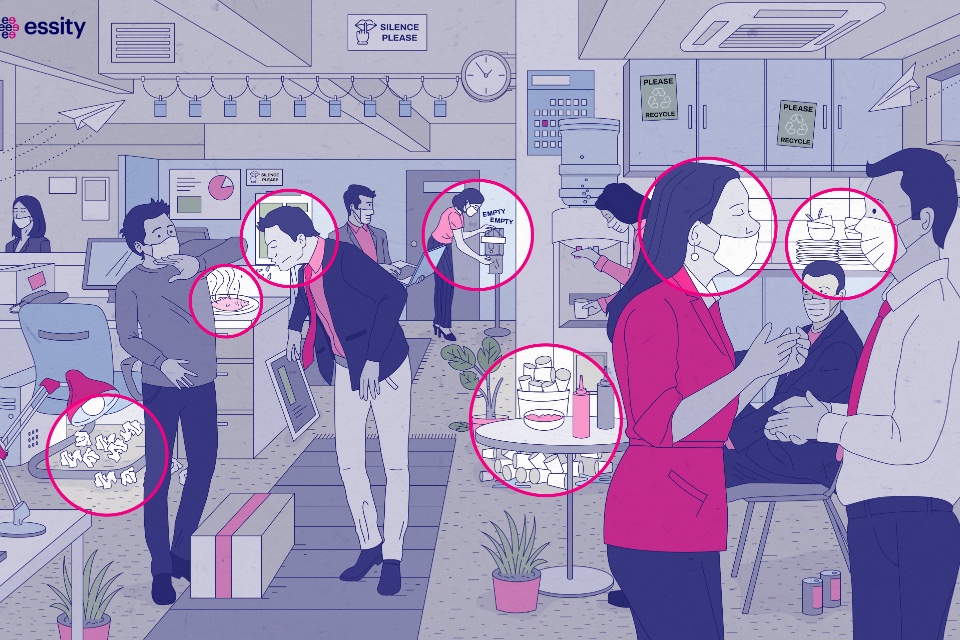 2.            People coughing and sneezing without putting their hands in front of their mouth

23.          People who think nothing of discarding paper towels all over the toilet floor

30.          People who open the windows without checking with people nearby

43.          People who start a phone conversation without any pleasantries first