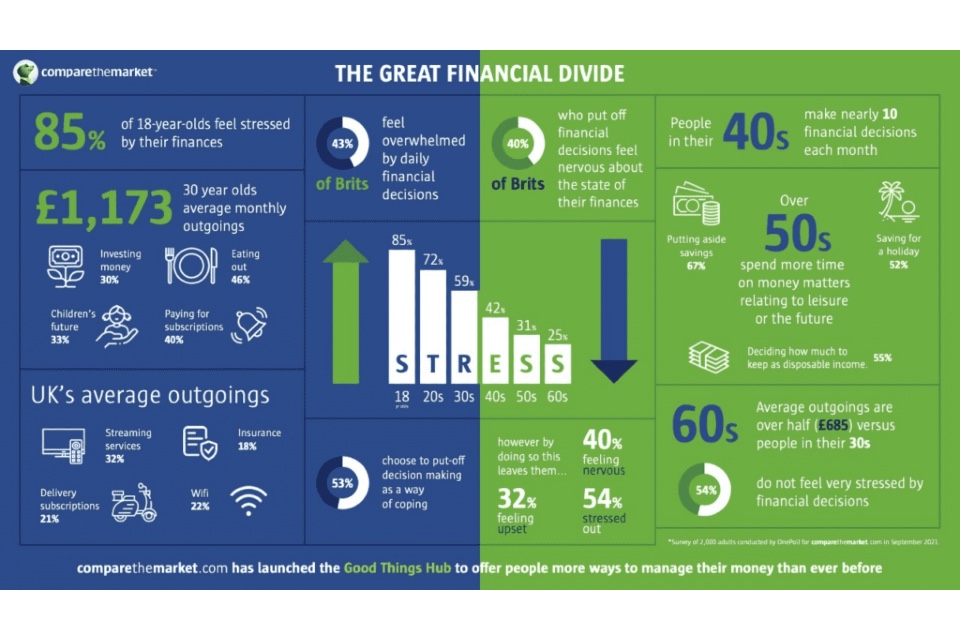 Feeling overwhelmed by your finances? You’re not alone

A study of 2,000 adults found 43 per cent feel swamped by the choices they have to make about money.

As a result, 53 per cent have avoided making certain decisions altogether as they couldn’t face it.

But this head-in-the-sand approach left them feeling stressed (54 per cent), nervous (40 per cent), and upset 32 per cent).

The research was commissioned by comparethemarket to launch its money management tool – the Good Things Hub.

The study also revealed differences in demographics, with 85 per cent of 18-year-olds feeling overwhelmed by financial decisions.

Only 31 per cent of 50–59-year-olds feel overwhelmed by their finances, along with just one in four over 60s.

The study found monthly outgoings peak in your 30s at an average of £1,173, with 46 per cent of that going on eating out, while putting money aside for their children’s future (33 per cent) and investing money (30 per cent) also take their chunk.

When adults get to their sixties the average outgoings are almost halved at £685, with 54 per cent admitting they don’t feel very stressed by the financial decisions on their plate.

For the over fifties, money is spent on matters relating to leisure and the future, including putting savings aside (67 per cent), deciding how much to keep as disposable income (55 percent) and saving for a holiday (52 per cent).

However, it’s in their forties when adults have the most outgoings – an average of ten a month, according to the study carried out via OnePoll.

Ursula Gibbs at comparethemarket.com said: “As we get older, there are more decisions to make about managing money and this tends to peak in our 40s.

“Therefore, as our lives get more complicated, typically with the introduction of children and mortgages, so can our finances, which many admit to finding overwhelming.

“For today’s young adults, entering the world of money management could feel overwhelming.

“Comparethemarket.com is now offering the nation more ways to manage their money than ever before helping to support everyone with their financial decision making.”

1.         Don’t put your head in the sand – Money management can be overwhelming and stressful, especially if you’re new to it or are facing a change in circumstance. However, the worst thing you can do is put your head in the sand if you’re feeling stressed. Instead take action and get on top of your finances by using tools such as those on comparethemarket.com which automate renewals and help you find great deals.

2.         Mindset – before you start your money management journey, you have to work your money mindset. The first step is identifying your “why”. Your Why is something so crucial that you will not give up, even when things get hard. For example, to support my family or retire at age 50.

3.         Needs vs Wants – The next step is to look at your outgoings and identify the things you are spending money on and if they are needs (life essentials such as groceries, rent/mortgage, water, utilities etc.) or wants (life’s luxuries such as eating out, holidays, tv subscriptions). A good way to do this is to list all your outgoings and then put them either in the need column or the want column. When you total the need column, you will

know “how much it costs to be you”. Then you decide what outgoings from the want column you’re going to keep.

4.         Accounts Method – People make a big mistake in having all their money go in and out of one account. A good way to manage your money is to split it into three accounts. The first account is for your fixed cost. These would typically be your direct debits (bill payments). The second account would be your spending account, and you would pay for travel, lunch at work, going out etc. Your last account is a savings account. You will build this account up with your leftover money after contributing to your fixed cost and spending account.

5.         Emergency Fund – Now that you have your money in order, the next thing to do is build up an emergency fund which should typically be a minimum of three months of your monthly outgoings.