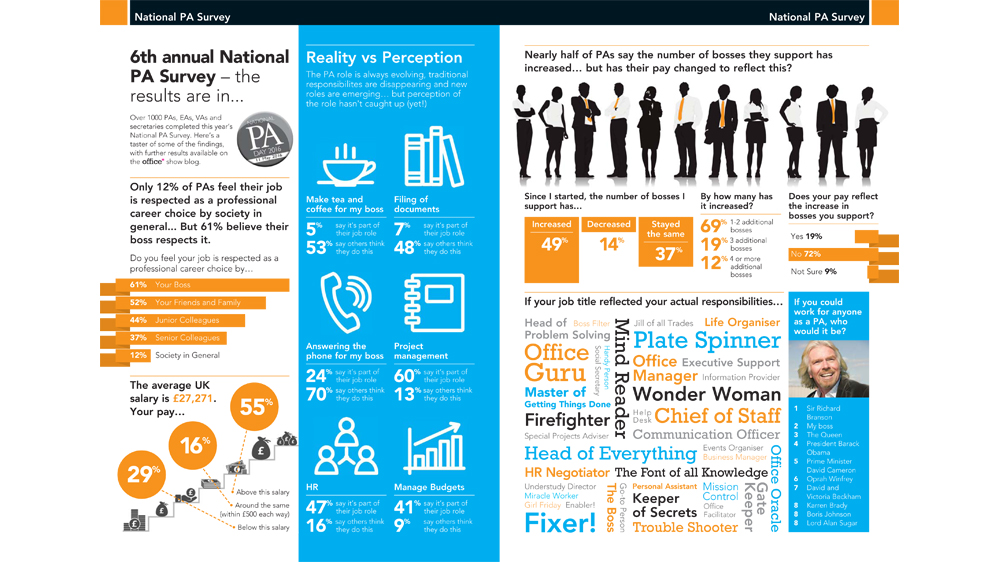 office* show announces the results of the National PA Survey 2016

The latest findings of the survey (which is now in its sixth year) are being unveiled to mark National PA Day on 11 May. Survey highlights will also be distributed at office*, which opens tomorrow at 9am at ExCeL London.

Completed by 1,000 PAs working in business and industry, finance, education, and the public and not-for-profit sectors, the 2016 survey certainly reveals some surprising results, particularly about the way the profession sees itself from the outside looking in – with only 12% saying that they felt that being a PA is respected as a professional career choice by ‘society in general’. It is this strength of feeling and perceived lack of professional recognition that first led to the launch of National PA Day in 2011.

Whilst the PA role has evolved almost unrecognisably over the last 10-20 years, many outdated attitudes, particularly around specific job responsibilities, persist. Notably, more than half of this year’s surveyed PAs have been in their role for over 11 years (27% for over 21 years), so will have witnessed these changes first hand.

To highlight how the reality of the PA role differs from the perception of the role and its responsibilities, Diversified UK asked PAs to outline their day-to-day activities, versus what they believed other people thought they did.

Perhaps unsurprising making tea and coffee, filing documents and answering the phone revealed the greatest discrepancies between the two ‘perspectives’; with PAs saying they actually spend more time on project management, HR and managing budgets than those three duties combined. Only diary management and arranging meetings for bosses secured a majority on both lists.

“I don’t think people really know what I do!” commented one senior PA, while others said their colleagues thought everything from fixing faulty office equipment to providing ad hoc support to the whole office fell inside their remit.

The 2016 survey also reaffirmed last year’s findings that the number of bosses/managers being supported by a sole PA is on the rise – with a significant 49% of PAs reporting an increase.

In 2011, a quarter of PAs supported more than three managers. That figure hit 40% for 2015. Of the 49% of PAs that reported an increase this year, 69% now support one or two additional bosses since they first started their present role. That means their workload has at least doubled. For a further 19% of PAs it’s tripled and for 12% it’s quadrupled.

Yet only one in five of them has received a pay increase for this extra work.

If you could work for anyone as a PA, who would it be?
Entrepreneur Sir Richard Branson, founder of the Virgin Group, always proves rather popular in surveys. Among others, he’s been voted most admired business leader, the people’s choice for prime minister and last year he was named most ‘inspirational person’ in Diversified UK’s office* show poll (ahead of Karren Brady CBE and HM Queen Elizabeth II). For 2016, Britain’s PAs have named him their ideal boss (beating even their current bosses into second place).

“There are an estimated 650,000 people working across the UK in a PA role – and although their job titles may vary and the industries that they support can be worlds apart – together their profession contributes positively to the productivity of every single part of the economy. National PA Day is the perfect way to celebrate their achievements and to encourage greater support and recognition of the individuals working within one of the biggest and most important professions in the UK,” says Carsten Holm, managing director of Diversified Communications UK.

office* will take place at the new venue of ExCeL London on 11-12 May from 9am to 5pm. For further information and to register for free entry, please visit officeshow.co.uk and quote priority code DVIS14 (Entry to the Keynote Theatre and office* Theatre 4 is included with all tickets spaces permitting).

Results of the sixth annual National PA Survey
The full report will be available at officeshow.co.uk later this month. To download the infographic, please visit officeshow.co.uk/wp-content/uploads/National_PA_Survey_2016.pdf.